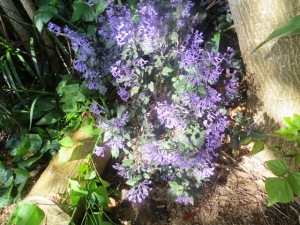 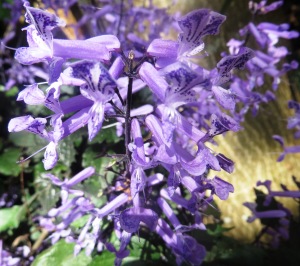 One of the loveliest plants for a shady spot in a warm climate garden is the plectranthus ‘Mona Lavender’.

This is one of the South African plectranthus bred from crossing P. saccatus with P. hilliardiae and the genetic combination gives ‘Mona’ some strong landscaping virtues lacking in others in the genus.

For one thing, this plant thrives in quite deep shade though it flowers better in the lighter shade of overhead foliage.  This makes it a good plant for growing around the base of trees – in my garden it flourishes in the shade of a large coral tree.  As the coral tree is deciduous for about two – three months in late winter the plectranthus, planted among begonias, cordylines and bromeliads, gets quite a bit of sun at the period when it is initiating flower buds.  Then, when the tree is lush again with quite a dense canopy of triangular leaves, the flowers appear in profusion.   In a sunnier position it will grow lower and tighter but plants will wither in hot afternoon summer sun unless given a watering at that time.

Each tubular flower is a deep mauve-blue with tiny delicate markings on the outer lip of the calyx.  When several bushes are massed in the landscape they form a long, sinuous  lavender-coloured cloud exactly at that height where so few other things flower.

Plectranthus are related to mints and the leaves are typically “mintlike”; a soft and bright green, hairy on both surfaces and with the underleaf coloured a deep, reddish-rich purple.  When windblown, the effect is quite dramatic, especially when the plant is in full flower.

‘Mona Lavender’ grows to about 70 cm (27 – 29 inches) and is quite bushy, with a naturally rounded shape.  I trim mine after flowering and tip prune in autumn to promote a low, well-shaped bush.  When it flowers, it puts out long, new spikes and I let these stretch to their full glory, with just a tiny bit of picking and pruning to keep them from getting too straggly.

Conventional wisdom says that  ‘Mona’  likes a humus-rich soil and plenty of water – and so it does.  However where I live, on a sub-tropical mountain at a bit over 600 m (2000 feet) with basalt soil I find it pays best to give the girl a bit of rough treatment.  I mulch the bed around the tree in which she grows, never give her much water in winter, and never treat her to a dose of artificial fertilizer at all.

After all, pretty girl though she is, and highly-bred, ‘Mona Lavender’ is still a plectranthus and, like all her kind, will do quite well in light, rocky soil without too much artificial watering.  In the wild,  Australian plectranthus (of which there are several species) are found mostly in rocky soils in areas where they get heavy summer rain and very little or none at all in late winter and spring.  The one thing this plant DOESN’T like is overwatering and poorly-drained soil.

So, in summary, plant ‘Mona’ in a well-drained bed of sandy, loamy soil, mulch it regularly, add compost if it’s the kind of soil that depletes easily, water well in summer when it isn’t raining, water sparingly in the dry season, and give at least one good trim after flowering each year.  This is a plant for the sub-tropics, dry-tropics and shady gardens in arid areas where plenty of water is available.  It will do well in sheltered warm temperate gardens too, in the ground or in pots that can be moved into warmer spots in winter.  In my garden it survives zero temperatures, being protected from frost by taller plants.

And if you’ve got one of those shady spots in the garden that’s hard to fill with colour, or a place which gets sun for only half the day,  plectranthus ‘Mona Lavender’ is a good choice.  It makes a pretty pot plant, too, requiring minimal care.

Plant ‘Mona’ in a row or mass behind a low-growing white plant such as alyssum for a soft, cool effect.

Lavender plants get leggy in summer and flower poorly, especially old plants.  Replace them with ‘Mona’, in ground or in the pot.

Use for borders, mixed beds and warm-climate cottage garden effects. 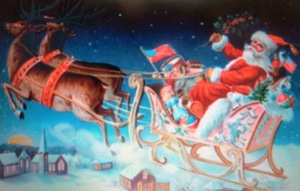 Santa baby,
Here’s my Christmas wish-list.  I’ve been an AWFULLY good girl this year so DON’T HOLD BACK.

A gold-plated trowel with a diamond-encrusted handle – only joking but I WOULD like a new  trowel with matching fork, in designer colours, not because I really need one but because I want to look as good when I’m weeding as Maureen next door.

Ditto new gloves and gardening apron.  Not just the usual tacky old stuff from Bunnings that my husband always buys me, but

something from an upmarket gardening shop.

A new, big compost bin that really works.  I’m sick of forking it over in my old plank-and-netting two bin system.  Perhaps in a

designer colour rather than basic black.

A selection of roses that are really and truly and honestly resistant to black spot and aphids.

One of those exquisitely elegant Dean Durrant water features,  teamed with something new and exciting in garden statuary that isn’t either fake Italian classical shit or Balinese.

A new pair of knees – titanium would be good.

A pair of self-sharpening secateurs

An endless credit card so I can buy as many plants as I want (I say this every year and never get it – but I buy ‘em anyway!)

So that’s it Santa honey.  All pretty simple really.  Just get out that sleigh and whip up those reindeer and get shopping.  You know my address and yes, I’ve got the milk and cookies waiting.  And I’ll be wearing that sexy red and white thong you bought me last year…
Santa cutie, hurry down the chimney tonight…oh bugger, we don’t have a chimney.  Never mind, I’ll leave the back door open…
( And you might like to check out this great YouTube video – Eartha Kitt with Friends singing “Santa Baby”)