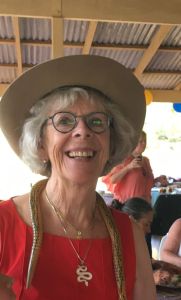 Jedda Van Os, dear to so many on Tamborine, turned 80 not long ago.  Although she now lives in the Netherlands she still comes back here every year at this time to see her son and grandson and re-connect with the many friends she made during her years here.

So on Sunday (November 24) we gathered under the Tamborine Mountain Showgrounds pavilion to make sure Jedda received her “OBE” in fine style.  Usually of course the showgrounds are lush and green but this year, thanks to the worst drought anyone living can remember up here, they were looking a bit tired and brown.  Still, under Vanessa’s baton we managed to make the scruffy underside of our otherwise attractive pavilion into a sufficiently attractive dining area – the pavilion is a good place for parties like this because even the rowdiest bunch can’t do much damage and there’s plenty of space for games, dancing and for kids to run around (fortunately we only had one of these on Sunday!).  Plus of course the adjacent kitchen and lots of chairs and tables.

First we gathered in the rotunda for drinks and then moved over to the dining area where all the bring-a-plate food was laid out, drinks were on ice, Vanessa’s punch (I cut up the fruit!!!) made an attractive centrepiece on the bar and various people had decorated tables in honour of the occasion – and the season.

Here’s the story in pictures:

Alas, our lovely showgrounds looked sadly dry and dusty…but still a good place for a party

This is a picture of my car There is no actual reason for including this except that I love my car and thought it looked nice under the trees!

Vanessa setting up the dining area

The main table set up elegantly in black and white by Jackie, for the guest-of-honour and family

This table was given a Christmassy touch to remind us that the festive season is not far away…party season starts at the end of this week!

…and soon enough the guest-of-honour arrived to be greeted by everyone with a lot of hugging and kissing and “glad you’re back in your TRUE home”!!! Here she is with Jackie who worked so hard to make the dining area look good. Including blowing up most of the balloons (I blew up two!)

We had to pose Jedda at our table because if you look hard it’s got all the Aussie animals she loves – including the bloody snake. When living here, trained by Vanessa, she was one of our local snakecatchers. 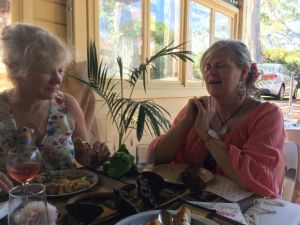 On our table, whatever it is Linda is saying it;s got Sandy praying! Possibly that she doesn’t break an ankle now she’s taken up tap dancing! Maybe Linda’s telling her she should stick to Linda’s own specialty, rock and roll!

Of course Barbara Proudman is also a dancer – in her case a former professional who danced all over the world and can tell you some good back stage stories. And as far as her media career is concerned, we learned on Sunday that she has gone from tea lady to editor! 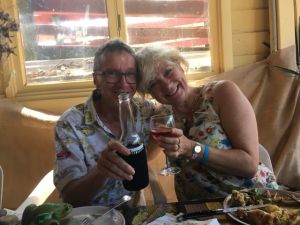 One of my favourite couples – dear Barry and Linda. Rock and roll brought them together, mainly, and they are still rockin’ after all these years.

Some modest birthday formalities – Vanessa tells us how wonderful Jedda is (among other things) while Jedda (and her daughter-in-law) look on with amusement.

…another crowd scene…though some people seem to have wandered off. Must be at the food table.

Jedda gathers her breath before the candles are lit. Naturally Leo and Anne’s bakery made the cake. Keeping it all in the family!

No Vanessa isn’t drunk! Probably just exhausted after being the major organiser of the day. But that’s our Vanessa for you – party planner extraordinaire, snake catcher even more extraordinaire, tomato grower, former shire councillor and Deputy Mayor, former bakery owner, involved in so many community activities she hardly has time to draw breath. And, as befits a girl who was born in Kenya, looking very glamorous in pink. Pity she took her hat off – possibly because I asked whether she thought she was at the Melbourne Cup! 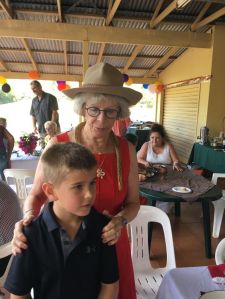 Jedda with her beloved grandson. Fake snake around her neck and Aussie akubra on her head. Son in the distant background. 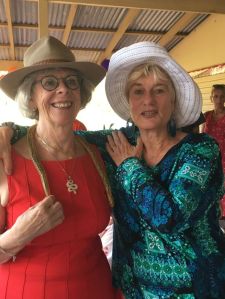