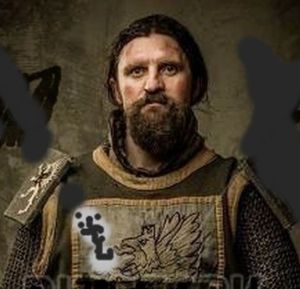 Another article that tries to make sense of Wagner’s Ring Cycle – by Julie Lake, author of Ringtones

Poor old Hagen!  He has such a dreary part to play in The Ring.  Wagner doesn’t introduce him to us until the fourth opera – Gotterdamerung.  And when we do meet him he’s such a misery!  Gloomy of countenance with never a hint of a smile.  True, he is able to summon up a kind or rough joviality with the Gibichung vassals when necessary, but you know he’s only pretending to be one of the lads because it suits his dark purpose.

Yet hateful Hagen’s role is crucial to the story because he is the one who kills Siegfried the Hero.  Thus precipitating the final doom – his own and just about everyone else’s in The Ring of the Niebelung.

Technically, this makes him a baddie.  Yet I find myself with a sneaking sympathy for Hagen.  Like so many others in the saga, he is the victim of forces far beyond his control and though he appears to submit willingly to those forces and, indeed, obviously believes that he himself is dictating the progress of events, he is in his way just as much a victim as poor stupid Siegfried.

In fact, if you think about it, Hagen and Siegfried have a lot in common.  Though not actually related they are step-cousins of a kind because Hagen’s father Alberich and Siegfried’s foster-father Mime are brothers.  Not very close brothers, mind you, or else the two boys might have grown up together and THAT might have brought about a very different outcome!

Hagen has been fathered by Dwarf Alberich, The Ring’s chief villain, on a mortal woman.  We know nothing about his childhood but he appears to have grown up mainly in the household of the Gibich, half-brother to the Gibichung lord Gunther and his sister Gutrune.  Wagner doesn’t bother to explain much about this relationship so if you want a bit more background you’ll have to turn to Ringtones.  It’s quite obvious that Hagen has had a rather rotten childhood; a father who isn’t around all that much and a mother who is long dead by the time he joins the story.  Obviously he is in a position of inferiority to that of Gunther, the Gibichung heir, and indeed seems to live with his rich and powerful kin as a sort of upper servant; a steward who runs the show and gives orders to the vassals and men-at-arms.

Alberich appears to view his son merely as a tool for his own vengeance and may indeed have bred Hagen just for this purpose.  As a half-human with good connections Hagen can be accepted where a Niebelung dwarf cannot.  He has a better chance of getting close to the magic ring – which is Alberich’s one obsession.  We take it as a given (at least we do if we’ve watched the three preceding operas) that Alberich has instilled this obsession in his son; then in Gotterdamerung he drives the point home by appearing to Hagen in a dream, reminding him of his filial duty in no uncertain terms.

So poor old Hagen has never known any love.  Alberich, after all, had long ago renounced it in favour of gold and power, in effect also denying it to his misbegotten son too.  Who knows what Hagen might have been like with a bit of decent parenting.

Siegfried, too, is the victim of poor parenting.  Indeed, both characters show strong symptoms of either psychopathy or perhaps Asperger’s Syndrome – inappropriate behaviour, casual cruelty, a  lack of empathy with others.  But while The Young Hero is at least blessed with good looks, charm, boundless energy and a capacity for sportive merriment Hagen is lumpen, sluggish and cold of heart.  Siegfried has the blood of the gods in his veins (or ichor, or whatever passes for blood with gods) while Hagen has the blood of cavern-dwelling dwarves.

So, blighted from birth, it’s no wonder that Hagen takes such a dim view of the world and even less to be wondered that he takes an instant dislike to Siegfried.  True, he has already marked his step-cousin down as a victim before their first meeting.  But you can tell, thanks to Wagner’s superb musical characterisation of these two foredoomed enemies, that Hagen just can’t wait to give that bumptious but popular Young Hero his comeuppance.  Despite their several similarities, Siegfried is simply everything that Hagen is not.  Does Hagen fully realise this? It’s hard to tell because, though menacing, he plods through his part showing no emotion – not even anger.

He is certainly cunning, though, and this appears to show an intelligence of which the appallingly innocent – and thick! – Siegfried is not possessed.  Hagen’s plan to trap and eliminate Siegfried, and to manipulate Brunnhilde, Gunther and Gutrune into helping him, is masterful.  Stolidly, he overcomes all obstacles. Yet the plan ultimately backfires. Is this the Fates at work?  Is it the overmastering power of redemptive love (as some Wagnerians would have us believe)?  Or is it that Hagen, despite his cunning, lacks the imagination to predict what Brunnhilde might do if Siegfried dies?  Whether or not Brunnhilde’s great love is redemptive is open to interpretation but there is no doubting her despair and her passion. Hagen, the loveless and the passionless, is incapable of understanding such feelings.

And so he fumbles the ball.  Almost literally, because he is so stunned by Brunnhilde’s self-immolation and its aftermath that he fails to grab the ring.  His death, like his life, is clumsy and harsh.

There have been many fine Hagens in the performance history of Gotterdamerung but I have a particular liking for the recent interpretation by Hans Peter Konig (NY Met Production).  This is no single-minded villain, hell bent on cruelty for the love of it.  His Hagen shows a degree of bewildered resignation: a sort of “what am I here for, oh dear I suppose I’d better get on with it then” approach.  He is grim, he is slow, he is so obviously not looking on the bright side of life that I, at least, found him quite pitiful.  Tragic, rather than wicked.

This is possibly because I don’t like Siegfried and find him infuriating!  Of course, if Hagen felt the same way he might have done better, from the point of his posthumous reputation at least, to have picked up his spear – or even a sword – and faced the Hero in single combat.  Except, as we know, Siegfried would have beaten the shit out of him!  And Hagen wasn’t in the business of pointless heroism; he had a proper job and estates to run and a ring to regain.

I’m not saying we should try to love the loveless Hagen.  But just endeavour to put yourself in his boots for a moment.  Until Gotterdamerung he has apparently led a blameless – albeit joyless – life.  Wagner tells us no differently and not even Ringtones accuses him of any previous crimes.  He’s got his mostly-absent and extremely unpleasant father bashing his ear from time to time with ideas of vengeance and power. He’s got his spoiled brother and sister apparently depending on him for getting anything done around the place, including finding marriage partners for them.  On the periphery he’s got an ill-assorted bunch of gods, half-humans and water nymphs vying for power and what he believes is his family treasure. And then he’s got wonder-boy Siegfried stomping boastfully around the general vicinity, in proud possession of the gold, the girl and a very big sword.

Okay, it’s Hagen’s influence that lures Siegfried to the Gibichung realm in the first place.  Nobody said he was a nice guy!  Just that, given the circumstances, it might not be all his fault.  Like Action in West Side Story, he’s depraved because he’s deprived and maybe…just maybe…if he’d had the right counselling when young they’d have found that deep down inside him there was some good.  Alas, we’ll never know!