Tiny Brown Scale insects on the stem of a metrosideros shrub. Many plants can be affected by these pests.

Scales are tiny insects that can create havoc on susceptible plants.  They look horrible, too.  The most common types are light brown but they come in lighter and darker shades too, with tinges of other colour. Different types of scales can be white or cream.  You notice them when they cluster on the twigs and stems and, sometimes, underleaves.  See picture. Often, too, you’ll notice a white, sticky residue in association with scale and this unsightly mess is due to ants who enjoy a symbiotic relationship with scale insects.

The recommended remedy is white oil, sold in hardware stores and garden centres.  There is also a product called Pest Oil which is considered more plant and environmentally-friendly.  But I use my own tried and true remedy which is cheap, easy and doesn’t harm either plant or surrounding environment.  This is an important consideration because many birds feed on scale insects, thus acting as useful garden helpers.

I keep an old 750 litre cleaning spray bottle (or buy a cheap plastic spray bottle from a garden centre/hardware store).  The size here isn’t important.  I put about two dessertspoonfuls of ordinary washing up detergent (liquid laundry detergent would probably do as well, haven’t tried it) and add two or three good squirts of household cleaner – the sort of stuff you use to clean bench tops and bathroom sinks.  This will contain an anti-bacterial agent of some kind.  But don’t use one that contains chlorine bleach.

Fill the bottle with warm water, then spray the plant.  The detergent will stick to the insects’ protective covering (which is the part you see) and smother them.  The small amount of chemical will finish them off and act as a deterrent against further infestation.  Yet it is not enough to hurt the plant or any birds that might come back and snap up a scale or two for supper.  In a day or two the scale infestation will disappear (you can help it along a bit by hosing or brushing the dead insects from the branches if you like) and you now have an easy remedy to quickly respond to any further infestations. 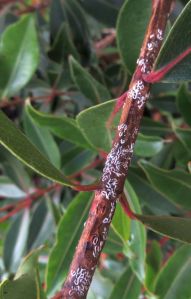