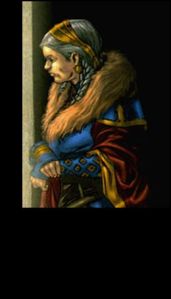 Frikka is just about the only major character in Wagner’s Ring Cycle who is uncomplicated, morally unambiguous and whose motives are never in doubt.  As the wife and consort of the Head God (and CEO of Teutonic Gods Inc.) as well as Goddess of Marriage she is the second most powerful character in the saga and though we may not love her she commands our respect – which is rather how Wotan feels, too.

Though her role in the four operas is small it is pivotal.  Firstly, it’s possible that without her influence Wotan might just have let the giants take Freia.  Freia is the Goddess of Fertility (and a couple of other minor things) and, as the Heavenly Horticulturist, responsible for growing and maintaining in good health the magical golden apples on which the gods rely for their eternal youth.  In a rash moment Wotan offers her to those big boys in the building trade, Fafner and Fasolt, as part-payment for building Valhalla, the new home of the gods.

When the time comes for payment, Wotan is in trouble.  He has given his sacred word to the giants and that can’t be broken.  But Freia is Frikka’s sister and the Head God dare not defy his formidable and very vocal wife in such a matter.  Had he done so, Alberich the Dwarf would have kept the Rhinegold ring and the story would have been very different.

However it is Frikka’s second act, which comes in the second act of the second opera, The Valkyrie (which is also the second part of the book Ringtones), that really changes the fates of just about everyone in The Ring.  She demands that Wotan abandon his beloved son, Siegmund, and let him pay with his life for breaching the sanctity of marriage.  Siegmund is Wotan’s illegitimate son by a mortal woman and very dear to his father’s heart, who sees in him the hero who will return the Nibelung ring to the Rhinemaidens and thus avert the prophesied destruction of Valhalla.  But the boy falls in love with his own twin sister, Sieglinde, from whom he has been separated since youth.  Sieglinde is married and when the two run away together the outraged husband, Horrible Hunding, takes his case to the Goddess of Marriage.

Frikka is not unkind but her good nature has been sorely tested.  For years – aeons – she has had to put up with her husband’s infidelities because Wotan is a serial bonker who’s never met a goddess – or a woman – that he didn’t try to bed.  Though deeply hurt by this behaviour, and not above reproaching him with it from time to time, Frikka mostly behaves with the dignity and restraint expected of Head Goddess and a member of the powerful Vanir clan.  Indeed, she seems quite resigned to her husband’s on again-off again romance (if that’s what we can call it) with the Earth Witch, Erda, who has given him twelve daughters, even raising nine of those daughters – the boisterous Valkyries – in her own home.  But then Erda is weird and ditzy and hardly worth bothering about.

An affair with a mortal woman, however, is another matter.  This, in Frikka’s eyes, is demeaning.  So it’s hard not to believe that in her cruelly indifferent attitude to the fates of Siegmund and Sieglinde there is a certain amount of vengefulness.  Her husband seems to love these half-castes more than any of his other children (except perhaps the equally illegitimate Brunnhilde whom Frikka also dislikes) so by hurting THEM she will hurt HIM and that will help assuage her own pain.

Be that as it may, it’s not the main reason for Frikka’s anger.  She is genuinely and deeply shocked not just because the twins are committing adultery but because they are also committing incest!  And of course she is right to be shocked because at no time and in no culture (apart from the royal Egyptians) is this acceptable.  She will have all of Valhalla on her side, especially those gods and goddesses who sit on the board of Teutonic Gods Inc, including members of her own high-ranking family.

And so she forcefully begs Wotan to change his mind about protecting Siegmund from the wrath of Hunding who might be a bully who took his young wife by force against her will but is still a Wronged Husband.  As Goddess of Marriage, she points out, it is her duty to uphold its sanctified legality.  If her husband does not publicly support her in this then she will be shamed before all the Nine Realms, where lesser beings look to heaven for help and justice.  And exemplary moral behaviour.

Wotan knows she is right.  Knows that he cannot allow his wife and consort to be humiliated and, for his own part, cannot be seen to bless so unwholesome a union as that between his son and daughter.  There will be no Master Race of combined gods and mortals, born from their incestuous loins.  He will have to abandon his plan and give in to his wife’s demands.

But he doesn’t do it with a very good grace.  In fact he makes it very clear that as far as he’s concerned from now on theirs will be a marriage in name only, a façade to conceal from Valhalla and the other realms that the Head God and Goddess are no longer truly united.  Frikka has got her way – but only at the expense of her husband’s love.

Siegmund is killed, Sieglinde first flees and later gives birth to their son, Siegfried, Brunnhilde the Valkyrie tries to defy her father and is horribly punished for it.  It’s likely that Wotan’s fury at having to yield to his wife’s sense of duty is responsible for the extremity of this punishment – he can’t take out his anger on Frikka so he vents it on the most obvious and available target.  There’s no love lost between Frikka and Brunnhilde but even so it’s hard to imagine that the Head Goddess would have approved of her stepdaughter’s degrading fate.  Though as far as we know she didn’t do anything about it – perhaps she was afraid to tangle with Wotan again in this highly-fraught family matter.

So Siegfried the Hero is born and grows up to fall in love with Brunnhilde.  Had his parents been allowed to live (albeit incestuously) they might have raised him up to be a very different sort of boy instead of the self-focused, swaggering lout that any half-god half-mortal is likely to become if brought up in isolation by a misanthropic dwarf.  He’d probably have married a nice mortal girl and done something useful with his life.  And had her compassion for her doomed siblings not moved Brunnilde to defiance she would not have been lying on that rock, waiting for Siegfried to free her.  And a whole lot of grief might have been avoided.

In The Ring, Frikka stands for old-fashioned values and moral rectitude.  Love is fine but must not override duty.  Sacrifice, even self-sacrifice, may be necessary for the greater good.  Decent reticence is more important to society than passion.  Self-gratification must never exceed self-discipline.  You can’t help admiring her.  You might even sympathise with her.  But like all do-gooders, Frikka never questions her own moral certitude and her inability to try and see a bigger picture ultimately does more harm than good.